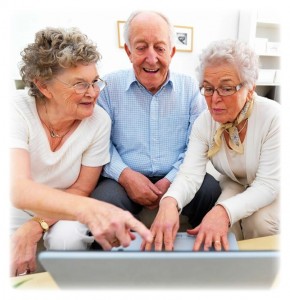 Whoever said that technology and gadgets are only for the young? Today’s seniors are also just as updated with the latest in modern technology, and are finding ways to incorporate much of the new innovations into their lifestyles, making activities more convenient and efficient. Manufacturers and retailers are also recognizing this fact and are specifically aiming much of their product offerings and services to appeal to the older market.

One popular device that seniors have embraced is the electronic reader. When e-readers were first introduced to the market, they were already very simple and easy for older folk to use, so they instantly became a hit. There was also the convenience of being able to take entire libraries of books and magazines with you wherever you go, something that seniors really liked.

Over time, special editions of popular e-readers with larger screens and fonts for seniors have also been introduced. These large display e-readers make reading much easier for those with limited vision. E-readers are not the only gadgets that have been tweaked in order to become more user-friendly for senior citizens. Keyboards with bigger keys have also become popular. These keyboards have extra large keys and different color contrast settings that make typing easier for those with vision difficulties.

Telephones with large views and displays have also been introduced and appeal specifically to older consumers. These home phone have larger keypads and screens that make dialing numbers much easier. Aside from telephones, cellular phones have also been manufactured with older users in mind. Even technology giants such as Samsung and Nokia have their own version of the best cell phone for seniors, as seen on this page. While much of today’s smartphones have bigger displays and complicated features, the best cell phone for seniors is the mobile phone that is kept basic and functional, but with the features that are necessary in today’s connected world.

Printing photos and other documents can be quite confusing for the older set, so many computer and camera manufacturers have come up with printers and digital cameras that make this process very easy for seniors. There are now cameras that feature one-touch printing, where all you need to do is connect the digital camera to the printer instead of having to upload everything to the Web or a computer first. Modern printers and scanners have also become very easy to operate, with different settings and WiFi connectivity so everything can be done quickly. 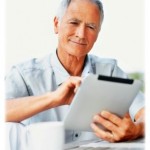 Of course, smartphones and tablet computers have also been embraced by seniors. These devices are very useful for on-the-go e-mail and messaging capabilities, as well as for the thousands of apps that can assist seniors in their daily lives. There are apps for driving and getting directions, apps for traffic and weather updates, and even apps that you can use to get recommendations on restaurants, retail establishments, and hotel deals. More importantly, health and fitness apps that monitor important personal data are also available on smartphones and tablets.

The next big thing being touted in the tech world is wearable technology, with Web-connected glasses and watches being hyped as the wave of the future. It remains to be seen whether wearable technology will also be as popular among older consumers as their e-reader and mobile phone counterparts have been. If manufacturers and innovators continue to produce wearable gadgets that are specifically catered to seniors and their different needs, it will be no surprise if these cutting edge products will also be just as loved by the older consumers.